Solar Slate set an objective to raise its profile with a wide range of customers, ‘gatekeepers’ and influencers.

Solar Slate took an alternative route to profile-building, by entering a major industry awards scheme. The aim was to rapidly build market awareness, brand-confidence and maximise ‘airplay’ with the B2C ‘green-conscious’ self-build audience.

Content Coms scripted the entry for the Solar Slate Multi product in the Build It Awards, organised by leading self-build magazine, Build It.

Solar Slate Multi won the 2014 Build It Award for the Best Sustainable Technology or Product. 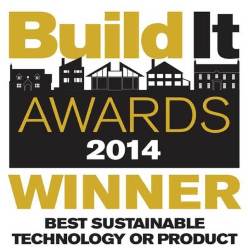 As a result of the win, Solar Slate received a raft of free publicity, but this wasn’t the only benefit. It was a huge morale boost for the whole team, and it opened up a wealth of new sales leads and partner opportunities.

The award functioned as a meaningful marker of excellence that made other companies want to work with Solar Slate.